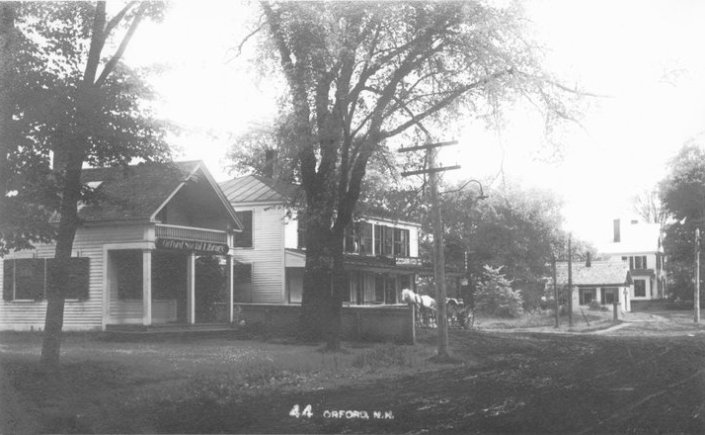 The Orford Social Library is one of two public libraries located in the scenic town of Orford, New Hampshire.

In June 1797, James Mann, Jr. and three other residents of Orford petitioned the New Hampshire legislature to pass an Act of Incorporation for an organization to be known as the OSL. The request was granted and the act made the four petitioners the proprietors.

The early documents are recorded in a “Ledger” which has a copy of the Act of Incorporation, By-­laws probably approved sometime before 1828, the Regulations for the use of the library, a list of books owned, and pages recording the books borrowed by each shareholder from 1828 until 1846.

The Library had 2 locations one on what became Main Street, the other in East Orford; neither was a fixed location. There were 2 librarians and the books were rotated between the locations. To borrow a book one must be a subscriber with a minimum of one share which cost $2. An owner of 10 or more shares could petition for articles to be included in the agenda for the annual meetings which were held on the first Monday of January. The Regulations provided fines for overdue books and for “turning down” leaves in a book.

We don’t have evidence of activity after 1847, except that sometime in the 1870s when Hannah Sanborn solicited books from residents to reestablish a library. She owned the property now known as Elm House and set up the library across the road over a store at the foot of the driveway to her father’s Ridge house. Membership fees and book rentals were used to purchase books. In 1899 another group incorporated under the provision of the public statutes.

The Articles of Incorporation state the name shall be the Orford Social Library. “The object for which the corporation is established is to establish and maintain a public library which shall furnish useful, elevating, and interesting reading for its members, and promote sociability in the community.“ The place of business was to be whatever room or rooms may be used by the OSL or where the corporation may agree to meet. There was no capital stock.

The first meeting was December 12, 1900. In 1902 the library acquired the present structure (formerly a millinery or haberdashery shop) for the sum of $425. There were modifications over time and a major renovation and enlargement in 1989.

The present organization is a co-­opted board of trustees with an elected representative from the town.